2020 November Feis has been cancelled due to necessary restructuring and improvements. We're continuing to work on shipping awards and the 2021 calendar.

Insight into our adjudication training is coming next week! 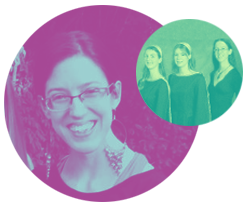 Known for her welcoming, friendly style, Ashley has adjudicated local competitions and National Championships in the United States and Canada. She certified as an instructor and adjudicator through the North American Irish Dance Federation (NAIDF), where she established their grade exams. After a competitive career which included teams at the Oireachtas, she ran the Triallta Irish Dance Company for almost ten years.

Ashley ran Diochra.com: Irish Dancing Online for thirteen years, including the popular Irish dance trivia game Webfeis. She has trained with CLRG, CRN and FDTA (Festival). Historical styles, sean-nós, social céilí — it’s all a joy. She loves seeing dancers of all ages succeed by achieving the goals they’ve set for themselves. 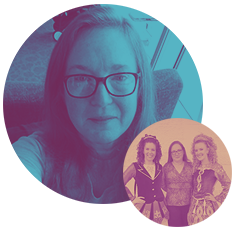 Sharon has traveled throughout the United States and Europe judging open platform competitions and championships, running workshops, and creating opportunities for Irish dancers and instructors to perfect their craft. Sharon won numerous local, regional and national championships during her competitive career, qualified regularly for the World Championships, and performed at Carnegie Hall under the tutelage of the McNiff family.

Sharon taught Irish step, Céilí and sean-nós through the Achill Academy of Irish Dance for over ten years, guiding students to reach their own goals, and proudly brought dancers to open platform North American, European and World Championships. She was a local, National, and World-level ADCRG for the NAIDF and the World Irish Dance Association (WIDA).

A former mathematics teacher and University professor, Sharon is a Ph.D. Candidate in the Instructional Design and Technology program at the Virginia Polytechnic Institute and State University.

After a successful run as a CLRG World Championship solo dancer, Brittany certified as a teacher with NAIDF and later remained certified under WIDA (now independent). Experienced in coaching dancers to high standards, Brittany has taught multiple title-holding dancers at National and International levels, has attended official Festival workshops, and has adjudicated independent feiseanna.

An early convert to open platform in North America, Patricia Silver certified as a céilí teacher and an adjudicator for lower levels and teams under the North American Irish Dance Federation, completing a portion of the ADCRG. Patricia is now affiliated with Cumann Rince Gaelach (CRG).

Patricia has adjudicated for many years, under NAIDF as well as independently, at local feiseanna and National Championships with her specialities focused on team dancing and the early solo levels. Under her tutelage, her dancers have earned numerous titles locally, nationally, and internationally.

Fully independent schools need representation, too. These teachers and studio owners from the independent Irish dancing community have unique educational experience that helps us round out our program and advocate for the needs of independent schools. These adjudicators focus on Beginner, Primary and Novice dances.

With an extensive background in Irish dancing, ballet, and ballroom, Brandan Tell Newman has been teaching dance for the past 16 years. She danced with professional companies in Las Vegas including the Las Vegas Civic Ballet, and with famous artists such as Frank Patterson, The Wild Celtic Boys, and Paul Anka. Brandan performed in many of the popular Las Vegas venues such as the Bellagio and House of Blues. Brandan has a B.S. in Elementary Education from the University of Nevada—Las Vegas and is a former school teacher.

Chelsea Gonzales runs Aistear Academy, a distance Irish dance school, from her RV! She is also the founder and director of the Oklahoma Academy of Irish Dance, has over 12 years of Irish dance teaching experience, and has adjudicated independent feiseanna. She competed very successfully at the Championship level in her teen years before pursuing teaching. Her students have traveled to competitions across the nation, winning awards at each and every one. A homeschooling and roadschooling advocate, Chelsea has had many adventures around the United States with her family.

This website uses cookies to improve your experience while you navigate through the website. Out of these cookies, the cookies that are categorized as necessary are stored on your browser as they are essential for the working of basic functionalities of the website. We also use third-party cookies that help us analyze and understand how you use this website. These cookies will be stored in your browser only with your consent. You also have the option to opt-out of these cookies. But opting out of some of these cookies may have an effect on your browsing experience.
Necessary Always Enabled
Necessary cookies are absolutely essential for the website to function properly. This category only includes cookies that ensures basic functionalities and security features of the website. These cookies do not store any personal information.
Non-necessary
Any cookies that may not be particularly necessary for the website to function and is used specifically to collect user personal data via analytics, ads, other embedded contents are termed as non-necessary cookies. It is mandatory to procure user consent prior to running these cookies on your website.
SAVE & ACCEPT